Tokimeki Memorial was released in many different forms over 12 years. A frequent question we encounter is "what are the differences between versions?"

Tokimemo is an extremely large and varied game, it's hard to tell what stuff just isn't in a particular version, versus simply hasn't been encountered, but this document will be a place to accumulate our understanding as it evolves.

Most versions feature quite different graphics and musical renditions, as a reflection of the hardware involved, so unless noted, assume each version looks and even sounds relatively distinct. We'll try to provide some example screenshots to assist. Sports mini-game variation is also quite common it seems. 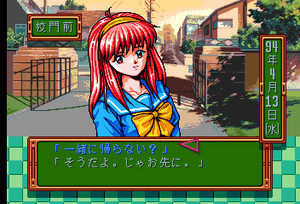 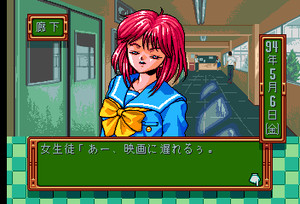 The original release from 1994. It hasn't really been played by people in our community yet, so we don't have too much detail, but our understanding is that the game was expanded and refined in later versions, so this version is likely the most raw in terms of design.

However, it is not the most primitive technologically, the use of CDROM permitted it to feature voices throughout the game and the intro OP video uses CD audio, putting it above the SFC and Game Boy (duh) in terms of technological limitations.

Graphically this is more pixel-art-like than the "~Forever With You~" versions of the game.

This version of the game is available on the Japanese PC-Engine Mini. There exists no official or fan translation at this time.

Who should go for the PC-Engine version:¶

The Playstation version introduced the "~Forever With You~" subtitle to denote it's enhancement over the original. It features redone graphics, music, new mini-games, a new full-motion video OP and purportedly new content. This subtitle would be used again on the Sega Saturn and Windows 95 releases.

It likely became the must-have version upon release in Japan, but we currently lack knowledge on whether the Japanese audience maintained that opinion as new versions came out.

It was released on the Japanese Playstation Store for emulation on newer consoles but we currently don't know if it's still available.

A tip: you can display subtitles during the confession scenes in this version by holding the Circle button. This is helpful for non-native speakers who struggle with JP listening.

Who should go for the Playstation version:¶

Some are holding out for a fan-translation of this. I have been shown several different messages from experienced PSX rom-hackers saying they tried but that the game would be extremely difficult to hack a translation for. My opinion is to assume it won't happen short of someone both extremely dedicated and highly talented taking it upon themselves --DistractedMOSFET

Released in 1996 as "Tokimeki Memorial: Densetsu no Ki no Shita de" this version is in many ways more similar to the PC-Engine original than the more-recently released Playstation version. It is generally referred to as a port of the original, although the graphics do seem cleaned up a little. It features a rendition of the first version's OP, although with SFC-generated music instead of the original CD audio.

This version had to cut back on the majority of voice acting and some graphics. It is hard to establish if any gameplay content was cut from the original, or if any content purportedly added to the Playstation version was also included. There is a claim on the Tokimeki Fandom wiki that some Shiori special events do not occur in this version, and that seems to line up with other documents such as fan-made guides. The cuts generally lead to this being referred to as "the worst version", with people like Tim Rogers going as far as to say that it's not the game he reviewed.

This version received a fan translation in March of 2022 and is the only version with any English translation available at the moment. It is only available via second-hand imports.

Sample gameplay on Youtube (Note that this is the original Japanese, and does not feature the fan translation's improved checkerboard animation smoothness)

Who should go for the Super Famicom version:¶

Released in 1996 and based very closely on the PSX version. They seem near interchangable.

It does have at least on unique feature: the ability to choose to confess to the girls at the end of the game, rather than have them confess to you. [Needs research, but if I (DistractedMOSFET) recall correctly this leads to a different end scene, but has different stat requirements. Harder?]

It is only available via second-hand imports.

A tip: you can display subtitles during the confession scenes in this version by holding the C button.

Who should go for the Saturn version:¶

There is a reasonably experienced group working on a fan translation of this, and say they have reason to believe it won't suffer the same challenges as the PSX version. I'm optimistic about the possibility of this being achieved, someday. --DistractedMOSFET

Released in 1997 for Windows 95 and like the Saturn version was based closely on the PSX release.

This version is almost certainly content-comparable to the PSX and Saturn versions (minus plyer-confession scenes from the Saturn version). But can be quite different in presentation. The graphics had their resolution increased from 320x240 to 640x480. Some of them look great at this resolution but others seem poorly remade in the opinions of most. The music is achieved via MIDI and so can vary a lot in sound based on your MIDI set up, this can make it a somewhat finnicky version to get a satisfying music experience out of.

Interestingly, this was the only version to ever receive any official translations, which were for Chinese and Korean. The Korean version is entirely re-voiced with a new cast.

A small thing to mention but this version does feature at least one known graphical quirk believed to be unique: if your character becomes injured the checkerboard animation changes to one with a hitch until your character becomes healed. While not very meaningful on it's own, it does make us curious about other quirks or additions it may feature.

This version is only available by second-hand imports. And quite commonly has stability issues on modern computers. But has been made to work in VirtualBox and PCem.

Who should go for the Windows version:¶

It was split into two games due to cartridge limitations that made it challenging getting all the characters and all their events into one game. The culture version has Ayako, Yuko, Mira, Yuina, Yumi, Mio, and the brand new character Kyoko Izumi, who only appears in this game. Sports version has Saki, Nozomi, Yakari, Megumi, and two brand new characters: Naomi Munakata and Patricia McGrath. Both versions have the common characters of Shiori, Yoshio, Rei and Miharu.

Some might think this version has a unique benefit for non-native speakers: subtitles on the girls' confession scenes at the end of the game. However, these are possible to view in at least the PSX/PSP and Saturn versions by holding Circle or the C button.

Who should go for the Game Boy version:¶ 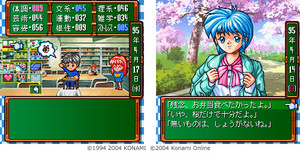 Originally slated for release in 2000, Konami finally released this version for the Japanese iMode phone platform in 2004. It gets near zero mentions in the English language internet, and very little is known about it.

Japanese mobile phone games are very poorly preserved, and this version, along with the mobile version of Tokimeki Memorial 2(Archived), and whatever Tokimeki Memorial LIVE(Archived) was are likely lost to time. Tokimemo 2 was on "Konami Net DX" which was shut down in 2016, it's close enough that maybe someone has it on a phone or something. 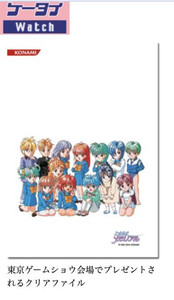 The last version of the game, released in 2006. This version is virtually identical to the Playstation version and some simple technological investigation confirms that it is definitely a port, even referencing the original PSX catalogue code within the ISO. The Tokimemo Fandom wiki says "The PlayStation Portable versions had minor alterations, but none which changed the overall game" but does not elaborate any further.

Who should go for the PlayStation version:¶

Being very closely based on the PSX version means that this version is likely cursed in the exact same ways and so you also should not hold out for a fan tl, IMO. --DistractedMOSFET

Music comparison snippets would be great. Need to get screenshots. Ideally we'd get a bunch comparing similar shots. This document may never be complete as we may never know the exact depth of differences.